Mitchell Stein- Coming right off the tremendous success of Aladdin in 1992, it was clear that there was a lot of demand for more Aladdin products and films. Continuing directly off the events of Return of Jafar, the television show brought back all of the favorites from the Aladdin films and aired on Disney Afternoon for a few years before moving to CBS.

Being a major fan of the Aladdin film, I really do enjoy this show a lot. It obviously doesn’t match up against the original film, but it stands as a great show on its own feet. Just like the films before it, Genie stands out as the greatest aspect of the show, delivering the most hilarious scenes. Dan Castenella returned to perform the voice of Genie, previously voicing the character in Return of Jafar. While not quite the same as Robin Williams, I couldn’t possibly think of anyone nearly as perfect to step into the role of Genie. Castenella is hilarious as the Genie, although sometimes he can end up sounding a bit like his character Homer Simpson. The other characters are great too. Gilbert Gottfried is back as Iago and even better than he was in the movie. Iago steals almost every episode with the most memorable of lines. Where Genie is more slapstick-type humor, Iago always delivers the last laugh through dialogue. Also returning is Scott Weinger as Aladdin, Linda Landin is back as Princess Jasmine once again and Jim Cummings as Razoul.

Then of course the villains are equally fantastic. Most notably, there’s Mechanicles, who describes himself as “the greatest of the great Greek geniuses” who planned his evildoing by his mechanical creations, most memorably, giant mechanical insects in the episode “Getting 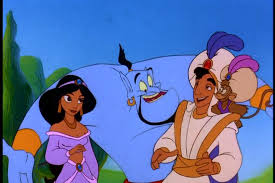 the Bugs Out”. Sadira is a great returning character who begins as a jealous and determined girl who attempts to get Aladdin to herself by any means necessary. Although she makes an appearance in “Strike Up the Sand” her most notable debut was in “SandSwitch” where she sets a memory eraser over everyone in order to lure people with false memories that she was the princess and Jasmine was just another street rat. Unfortunately for Sadira, the spell did not work on animals, and Iago and Abu get in the way of her plans. Sadira comes to join up with Aladdin later in the series and becomes good friends with the group. My favorite by far is Abis Mal, voiced by Jason Alexander and makes his first appearance in Return of Jafar. He is the main antagonist in the first episode of the series, “Air Feather Friends” and makes several recurring appearances throughout the rest of the series. Jason Alexander is just hilarious so there’s no doubt that this is my favorite villain throughout the series.

Although it can be rather silly at times, I really love this show. I think it’s one of the best crafted Disney television of the era..The story follows Aladdin and Jasmine still planning to get married (which they never do in the series, but finally get married in The Forty Thieves). What I think it’s lacking is probably musical numbers like The Little Mermaid television series did before it, or at least an original opening song. The opening theme used was reminiscent of “Arabian Nights” with very different lyrics. I think I would have preferred the show with some songs like the movies before them.

Twenty years later, Aladdin: The Series still stands as a great and fairly entertaining television series, although quite forgotten by Disney fans. I do hope this series makes it’s way to Blu-Ray or DVD sometime soon.

Support us on amazon!