James Atchely- Disney World is pretty awesome, and not just for the rides.  It’s the ambiance, the theming and the sense of place that make Disney World that much cooler than your local amusement park.  Will you ever find a place as mysterious and adventurous as The Animal Kingdom, or as quirky and immersive as Tomorrowland within Six Flags or Universal?  Probably not.

There has been debate over which of the many fantastical places contained within Disney World’s four parks is the best.  Many argue that The Magic Kingdom is the best park, and nothing in the other parks compare.  Others love the beautiful pavilions at World Showcase in Epcot.  I once even heard a guy say he liked a Disney Water Park.

Only a few weeks ago, I traveled to Disney World on a quest to end this debate once and for all, and what I found may surprise you (unless you’ve read the title of this article that is.)  In my search of lands filled with adventure and fantasy, I found no better themed area then Dinoland U.S.A. at Animal Kingdom Park. 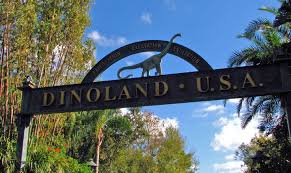 Even people who have been there many times may no know that there is a theme within the walls of Dinoland, It feels sort of like a land made out of random dino-tropes to please the children.  Even I thought it was junk at first glance, but a little exploring was able to change my mind very quickly.

The first thing I noticed was the music loop in the Boneyard, a dinosaur themed play area.  The area music that plays here is all semi-dinosaur themed, but better than that, the music is mediated by two colorful characters named The Digger and Bone-Head.  If you sit in the Boneyard for a while you can listen to the entire music loop (which is quite long,) and can actually get the story behind the two characters.

The two are part of a group of prankster students who have pirated the radio airwaves of Dinoland from “guys in suits” in order to present their pirate broadcasts.  A few hints in the full loop hint at the true identity of these two obnoxious pranksters.  The two mention their prankster mission, the fact that professors are the target of their shenanigans and even show a surprisingly complex knowledge of paleontology.  This is a pretty big key to unlocking what’s really going on in Dinoland.

It seems that Dinoland is a bit of a college internship area that has been taken over by tourism.  In the Resteraunt-osaurus, Dinosaur(ride) and Boneyard areas there is clear evidence that there is some sort of prank war going on between professors and students, they even have an actual score board set up.  Most of Dinoland is supposed to represent a paleontological society of sorts that interns young college dino-enthusiasts as part of their program.  The college students are mischievous as one might expect, and forge all sorts of pranks; including pirating the local radio station and renaming the local café “Resteraunt-osaurus.”

The parts of Dinoland that aren’t ruled by insidious college students make up Chester and Hester’s Dino-Rama.  My assumption is that this little roadside attraction came into existence when the paleontological society next door started offering time travel missions to go see dinosaurs (as can be seen in the Dinosaur attraction.)  As one can imagine this caused quite an uproar, and next thing you know Chester and Hester came to town to cash in on this potential “tourist trap,” and built the Dino-Rama.

Also:  do you want to know what Chester and Hester look and sound like?  You can hear their voices during the Triceratops Spin ride; they do the instructions before the ride starts.  There is also a picture of the elderly couple hanging on the wall in Resteraunt-osaurus.

Hopefully the level of detail I have described in the last few paragraphs has blown your mind.  What makes Dinoland one of the best themed lands in all of Disneydom is that its theme is not obvious; you have to look to find it.  I only spent a few hours in Dinoland on my trip, and I didn’t see close to everything there was to see.  There’s a probably a whole lot more Disney fun to be found in this wonderful land.  I would encourage you to take a good look around next time your in The Animal Kingdom, there’s a whole bunch of great stuff to discover.

Be sure to check out James’ blog for more awesome articles, including a special behind the scenes look at The Disney Multiplane Camera!