Ryan Dosier- Brother Bear (2003) is my next viewing stop on my ride through one of the weaker periods of Disney animation. The early 2000s failed to capture the love and admiration that other times in Disney animated history has, and it continues to be looked down upon as one of the worst periods for the company. Brother Bear did not help to curb that trend.

Right off the bat, it’s clear that Brother Bear will be a visually stunning piece. The animation is outstanding throughout and the layouts are severely impressive. The colors used in the film are also extremely vibrant and stunning. Disney animators had gotten very good at shading and coloring and lighting their films by this point. The artists created an amazing rendering of the ancient wilderness and watching the characters move in the backgrounds is one of the true highlights of the film.

Unfortunately, the rest of this lackluster effort doesn’t match the wonder of the artistic work. The storytelling is shoddy at best with some major plot holes and contrived resolutions that make no sense whatsoever. Kenai, the main character, kills a bear as a human before he himself is turned into a bear. Later we find out that the bear he kills is the mother of Koda, the young bear cub he has become friends with. Once Koda finds this out, he is—obviously—upset and refuses to be with Kenai. But this lasts all of five minutes before two comic relief moose inadvertently remind him that brothers love each other and sway him. (?!?!?) It is a baffling resolution that is solved way, way too simplistically. It is incredibly disappointing.

The characters are also very forgettable for the most part. Kenai, the main character (inexplicably voiced by Joaquin Phoenix) is not at all compelling. He is grumpy, stubborn, and comes to a very lame resolution. Rutt and Tuke, the two moose, are relatively funny but they serve virtually no purpose and simply appear randomly throughout the movie. The only truly fun character is Koda, who has a wonderful voice and spunk and charm that draws you in. He is very funny and an accurate representation of excitable kids on a road trip. Koda is the only great character in Brother Bear.

Phil Collins, who had previously done music for Tarzan, wrote the music of the film. Brother Bear fails to have any song that reaches the level of anything in Tarzan, but there are a few great tunes. “On My Way” and “Welcome to Our Family” are both very good and very catchy. The rest of the songs left no impression on me and for the most part, Brother Bear’s music is completely forgettable. Throughout the film, the music is not used to further the story, but it is used merely as an excuse to use a montage. This happens at least four times in Brother Bear and it just gets annoying and repetitive.

There’s not much more to say about Brother Bear. The film is entirely forgettable and leaves the viewer no good reason to remember it. While there is some truly stunning artwork in Brother Bear, the inexcusably weak story and resolution, the unenjoyable characters, and the forgettable music make it one of the least impressive Disney animated features to date. 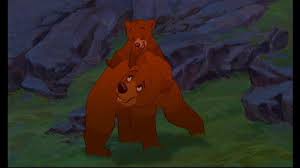