Ryan Dosier-After the incredibly weak Brother Bear, Disney animation seemingly could not bounce back with an even somewhat decent film. The next two features to come out of the studio are among the weakest in its nearly-80 year history. The early 2000s continue to be an incredibly trying time for Disney animation with the next two films, Home on the Range (2004) and Chicken Little (2005).

Home on the Range is absolutely the worst of the two films and the worst thing Disney produced since The Black Cauldron. While I dislike The Black Cauldron more, Home on the Range is absolutely second worst. The film is obnoxious, ornery, pathetic, unfunny, and uninteresting. Why a film about cows acting as bounty hunters ever got the green light will forever be an enigma to me. Who on earth would want to see this?

The design of the film is different and cartoonier than many Disney features and it all looks rather lazy. Some of the backgrounds are good, but the character designs are all uninspired and lame. There are times when the animation is good, but on the whole, it is tepid and tired. Nothing ever jumps out or electrifies the screen. It’s incredibly sad.

Virtually all of the characters in Home on the Range are terrible. None of them have any appealing traits, voices, or animation. With a voice cast led by Roseanne Barr and Cuba Gooding, Jr. viewers shouldn’t expect much, but it is almost surprising in how bad the voice acting really is. This can be attributed to both the boorish, despicable dialogue and the pathetic humor. There are strings of burp jokes, fart jokes, udder jokes, and other childish comedy staples. It’s painful to watch.

Home on the Range is terrible and ridiculous. Some music from Alan Menken makes it the slightest bit forgivable, but 99% of the film is forgettable and painful. Disney is infinitely better than this pandering, pitiful piece. It is no wonder that Disney closed its traditional animation department after Home on the Range. Talk about an udder disappointment. (I had to.)

Thankfully, Chicken Little provides a fun viewing experience throughout most of the film. It is a much, much stronger film than Home on the Range and even Brother Bear. It is only the second full-length computer animated feature from Disney and it leaves quite an impression. The beginning of the film is hilarious with some wonderful animal gags and puns (e.g. an actual bull owning a china shop).

The film is chock full of funny gags and fantastic dialogue. The dialogue in the film is very snappy, modern, and hysterical. The voice cast for the film is also dynamic and great. Zach Braff stars and he completely gives his all to the role of Chicken Little. He has some terrific delivery in the film and really makes Little stand out. Joan Cusack, Steve Zahn, Don Knotts, Patrick Stewart, Fred Willard, and a host of other great talents lend their voices as well. The voice cast and dialogue is spectacular in Chicken Little. 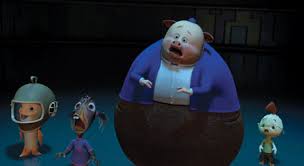 But the animation, design, and storytelling leave a lot to be desired in the film. The computer animation is good, but leaves a lot to be desired still. Some of the character designs are far too simplistic. The story loses a lot of steam from time to time and there are two musical montages back to back, which is a very weak storytelling tool. The alien inclusion is a complete left turn that never really works completely. But the father and son dynamic is magnificent, there are some hilarious scenes (baseball game), and the great gags are pretty consistent.

Overall, this quirky, fun little film is delightful. Characters like Runt of the Litter and Fish Out of Water are really wonderful. The humor in the film might actually work better in 2013 than it did in 2005. This is the era of quirky, quick, quippy dialogue and characters and Chicken Little has plenty. The film holds up and is a bright point in this mostly weak period of Disney animation.