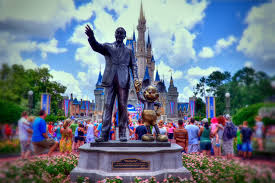 Michael Wermuth- Walt Disney World has so many great rides and attractions, so right now, I’m going to list my top ten favorites. However, I must warn you: I haven’t been to Walt Disney World since 1995, so this list will include some attractions that are no longer there, likely be leaving out a lot of great attractions that have come out since, won’t include anything from the Animal Kingdom (which was added two years later), and will be referring to Disney’s Hollywood Studio as the Disney-MGM Studio.

Oh, and if you know that I have also written many articles for The Muppet Mindset (and if you didn’t then this sentence just let you know) then you can probably correctly guess what the number one choice is.

One of the most iconic rides is “It’s a Small World”, an indoor boat ride showing audio-animatronics of kids from all around the world singing the catchy title tune, showing that it is a small world after all (well, not as small as the ride…).

Part of a former section of The Magic Kingdom that went by many titles, including Mickey’s Birthdayland and Mickey’s Showland. Visitors could go into Mickey;s house and look around. It was nice.

The Great Movie Ride is a ride that takes visitors through replicas of sets from classic movies, with animatronics of the casts of those films. Among the movies represented include The Wizard of Oz, Raiders of the Lost Arc, Singing in the Rain, and Mary Poppins. I didn’t know this until recently, but The Great Movie Ride is also the reason the MGM Studios park exists. It was originally planned for Epcot, before it was decided to have a movie-themed park.

The first Muppet attraction that came to Walt Disney World was this live-stage show featuring walk-around versions of the Muppets, plus special video footage of Miss Piggy, Fozzie Bear, Mickey Mouse, and Lilly Tomlin. The Muppets sing such songs as “Personality”, “The Heart of Rock and Roll”, and “Bein’ Green”. This attraction only lasted from 1990-1991, and luckily I was able to see it before it closed.

During the early 1990s, the Teenage Mutant Ninja Turtles made appearances at the MGM Studios, signing autographs for fans. I can’t remember if they also did a show or just autographs (though I recall that the theme song was performed). Of the two times I’ve been to the MGM Studios, I got the autographs of Michelangelo, Donatello, and Leonardo. It’s interesting that the Ninja Turtles were at the park, since, as far as I know, Disney never tried to acquire the rights (unlike the Muppets). I think the Turtles were there until 1996.

5. Honey I Shrunk the Audience – at Epcot

Epcot is my least-favorite of the original three parks. Of the two times I’ve been there, me and my family spent the least-amount of time there. I’d probably enjoy it more today than when I was a kid, but the fact is that there aren’t too many attractions I liked. The main exception was Homey I Shrunk the Audience,  a 3D follow-up to Honey I Shrunk the Kids and Honey I Blew Up the Kid. In this film, Wayne Syzlak is given an award, but accidentally shrinks the audience. While maybe not as elaborate as Muppet Vision 3D, there are some in-theater features to make it appear that the audience has really shrunk, including feeling mice running loose through your feet and the dog sneezing into the audience.

4. Honey I Shrunk the Kids play area – at Disney-MGM Studios

I went here before I even saw the movie, and it was fun. A big play area with oversized props, providing the experience of the movie.

A flying ride that takes you through Neverland. It was fun riding and seeing animatronics of the Peter Pan characters. Originally the audience was supposed to represent Peter Pan, a concept many didn’t realize, making them wonder why Peter Pan wasn’t in the ride, so Peter was eventually added to it.

2. Dumbo the Flying Elephant – at The Magic Kingdom

I guess I like the flying rides, since two of my three favorite attractions are flying rides. This one has guests getting inside a mechanical Dumbo and riding around in circles, choosing to fly up or not (would anybody ride this without hitting the button that allows Dumbo to fly?). It’s a simple ride, but still a great one.

Being a part of the MGM Studios since 1991, and Jim Henson’s final production, Muppet Vision 3D is among the biggest highlights of the park. Outside the theater are various movie parody posters with the Muppets, there’s a pre-show hosted by Scooter, in a room full of Muppet props, and the main attraction is the 3D film, with the theater being a recreation of the Muppet theater, with audio-animatronics of Statler and Waldorf in the balcony (and Bean Bunny in another), penguins in the orchestra (I would have preferred the regular orchestra, especially since most of them aren’t in the film), The Swedish Chef running the projector, and a walk-around Sweetums appearing in-person at one point. It would be great if this could somehow be released on DVD or Blu-ray, though it wouldn’t be the same as watching it at the parks.

Well, those are my favorites attractions in Walt Disney World? What are your favorite of the theme park attractions?

Submit your favorite attractions in an email to mickeymindset@gmail.com!