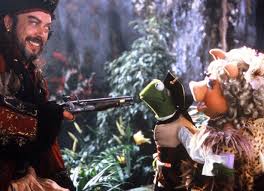 Dwayne Fletcher- Stop the Presses and shiver my timbers, Walt Disney Home Entertainment has released not one but two classic Muppet movies in high definition blu-ray! This release came as a surprise, and a shock to a lot of fans, due to the odd pairing of these two movies. None the less I am proud, and honored to review The Great Muppet Caper/Muppet Treasure Island: Of Pirates and Pigs Collection. This is the fourth, and fifth Muppet movie to be released on Disney Blu-ray.. The first was A Muppet Christmas Carol, followed by the 2011 movie The Muppets. Third and most recently was The Muppet Movie and now these two great movies as well. With this collection Disney has now released all of the Muppet movies that they have the rights to. Two other movies The Muppets Take Manhattan, and Muppets from Space are currently owned by Sony, and have also been
released to Blu-ray.

The Of Pirates & Pigs collection presents both movies in high definition which means that both the video and audio presentation have been enhanced to a very high quality. The collection comes with a Blu ray disc and two DVD’s. The DVD’s however do not included any special features.

The best part about the video, and audio for the Blu ray is the fact that they both have been enhanced to there best quality to date. The not so good part, is that for both the Blu ray, and DVD the video is presented in Pan to Scan full screen instead of a wide screen ratio. This is only a minor issue when you take into consideration how well the video, and audio look and sound compared to previous releases.

This collection has several different interactive menus to navigate through. The first two menus have stills from both movies. The first menu is a language select,and the second menu is the movie selection menu with both movies listed. The Muppet Treasure Island menu has several different shots from the movie and a selection of different options such as Special Features. Scene Selection, and so on. The Great Muppet Caper menu we find Kermit Fozzie and Gonzo in the red room developing pictures. There are several pictures from the movie moving around on strings and close pins for drying. The same options that are on Treasure Island are also found on this menu Both DVD’s have the same menus as well.

Both movies have there own special feathers, and are not included on the DVD’s. They are as follows:

Like the Muppet Movie release these are fun sing along’s that have different backgrounds pictures, and video from the movie.

Though this collection may be an odd paring of two Muppet movies, and the lack of special features. I for one could not be happier with this release. Disney could have done a little more with this release, but the fact that they have been released, and giving the care of being made into high definition has definetley made this release worth buying even if you already own both movies.

Muppet Blu-Ray Reviews will return next week with a review of The Muppet Movie on Blu-Ray.
The Mickey Mindset: mickeymindset@gmail.com