Dwayne Fletcher- For nearly 35 years the Muppet Movie has been seen in theaters, and homes fulfilling Kermit’s dream that started it all, to “Make millions of people happy”, and finding that rainbow connection with “the Lovers, the Dreamers and most importantly you.

Since the movie’s debut in 1979 it has been released to home video, beta laser disk, and DVD over 16 times in just the United States alone, When the Walt Disney Company bought the rights to the Muppets, they to got into the act and in 2005 released not only The Muppet Movie, but also  The Great Muppet Caper, The Muppets Christmas Carol, and Muppet Treasure Island. All of these movies where relessed under a special edition banner titled “Kermit’s 50th Anniversary” With this release all four movies gained at least one bonus feature entitled “Pepe’s Profiles:” which would profile one of the Muppet stars.
Kermit the Frog, Mrs Piggy, The Great Gonzo, and Fozzie Bear where all featured and interviewed by Pepe, and there other friends Rizzo the Rat, Bunsan Honeydew, Beaker, Statler, Waldorf, and Sam the Eagle share there thoughts of the one being profiled.  For The Muppet Movie the 2005 release did not include the Jim Frawley’s Camera Tests, which were included with Sony’s release back in 2001.

Video/Audio:
The video presentation is from the 2005 relesse,which has been transformed into high definition. Before the movie was released Disney made a video showcasing how the blu-ray version would look aginst the DVD. It would appear that the DVD version had some sort of dark-ish tint to it, when done in high definition that tint is removed and a much brighter, and more colorful picture is shown. The audio does not appear to have been enhanced. 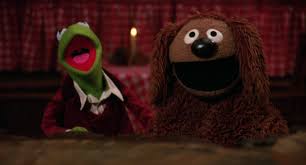 With this release we have new interactive menus. The artwork of the menus is felt artwork, with moving illustrations. There are three different backgrounds, all with different instrumentals from the movie. The first one starts with the sun and pans down to Kermit sitting on a log with his banjo the first musical bars of “Rainbow Connection” are played and other memorable scenes from the movie.

Bonus Features:
The Blu-ray has a few new noteworthy bonus features that have never been released before and are Not included in the newly reissued DVD, they are as follows.

Frog-E-Oke Sing Along: This feature is a Sing a long of three songs from the movie. Rainbow Connection, Movin Right Along, and Can You Picture That each with there very own video with some new shots of Kermit, Fozzie and Animal dancing. Each video has the lyrics popping up in different ways to fit with the backgrounds. Viweres can also access this feature with Disney intermission When you pause the movie these three sing alongs will play until you start the movie again. You can also turn the intermission off by simply going to Set Up  on the main menu.

Jim Frawley’s Extended Camera Test:  The camera test has returned and is better then ever! This is an extended version then what was originally released by Sony in 2001. This is the first time that the Muppets where shot outside of a studio, and the tests where to not only see how the Muppets would look but how they would fit. In the extended sections we see more interaction with Kermit, Fozzie, and Sweetums. This feature is a must see for any Jim Henson and Frank Oz fan, as they take the Muppets out into the real world for the first time, testing how they survive outside the regular studio. The results were perfect.

Doc Hopper’s Commercials: This is an extended scen that shows the full complete commercial with Doc Hopper singing and dancing in a frog suit. After watching this you can get more of an idea why Kermit though it was so terrible.

Original Trailers: There are two trailers for the movie. One is the teaser trailer, and the other is the original theater trailer. Each trailer showcase a different array of shots from the movie, with a different narration of each one.

Pepe’s Profiles: Kermit – A Frog’s Life This is the only feature that is inculded in the newly relessed DVD. The featuer is from the 2005 release, and it featuers Pepe the King Prawn interviwing Kermit the Frog. It also has sevral of Kermit’s friends shareing there thoughts and birthday wishes.

Hidden Easter Egg Bicycle Outtakes: This feature is a rare gimps of how some of the wide shots of the Muppets riding bikes are done. We see four to five diffrent takes of Kermit riding his bike and some of the small problems that occurred to make sure that the shot would look as real and believable as possible. 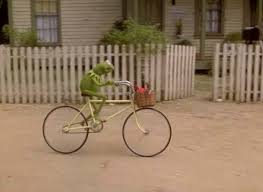 To access this hidden feature on the main menu go down to Sneak Peaks Then click right and a button of Kermit on a bike will appear, hit enter and the feature will begin.

As you can see there is a good mix of new, and some not so new features. The feaatures really showcase a little bit more depth into the movie and how it was made. In the writers mind having the movie released in high definition was a bonus itself.

Final Thoughts: The Muppet Movie is a very important part of the Muppets history. it showcases the Muppets at there finest from. They where funny, sweet and charming. The movie itself is still relevant to this day, with the exception of some of the guest star cameos. This Blu-ray edition is a must have for the seasoned Muppet fan to the newest Muppet fan. If not for the bonus features but for being able to watch this movie beautiful high definition.