Michael Wermuth- Recently, The Mickey Mindset had an article on the top ten Disney TV series. By coincidence, I had contemplated doing such an article before it was posted, though I hadn’t written any drafts of it. Also by coincidence, most of the shows that would have been on my list also made it on that list. However, as I’d been thinking about my favorite Disney shows, I had thought about a few shows I really like that didn’t make that list, and now, I am presenting some of my favorite Disney shows. And no, I’m not listing any Muppet shows because they were not technically originally made by Disney but rather just aired on Disney family stations.

This was a fun show to watch. Pongo and Perdita rarely, if ever, appear on the show, and with only a small portion of the 101 dalmatians being main characters, the focus being on Lucky, Rolly, Cadpig, and their rooster friend Spot. This show takes place on a farm that Roger and Anita bought, and on this series, Cruella De Ville wants their farm and often schemes to get ownership.

One of my favorite episodes (and few I can really remember) is “Mall Pups”, in which the main pups sneak away from class to go to the mall in an attempt to meet the first lady and first dog, only to get caught, be grounded for three weeks, and never even meet them. The series ended with a great three-parter, “Dalmatian Vacation”, in which Roger and Anita learn that the minister who got them married was not a real minister, and Cruella learns that if they don’t get remarried she can own the farm.

Some of my favorite episodes include: “Teachers Bet”, in which Mr. Feeny lets Corey teach for a week; “Sixteen Candles and Four-Hundred-Pound Men”, in which Corey must balance being at Topanga’s sweet 16 birthday while also helping Frankie get on his father’s (professional wrestler Vader) good side during a wrestling match; “Pop Quiz”, in which Corey and Shawn find out what’s on an upcoming test and think they’re cheating by studying it; “Rave On”, where Eric plans to host a rave on the same night as his parents anniversary (guest starring Davy Jones, Mickey Dolenz, and Peter Tork of The Monkees); and “The Thrilla’s in Pilla”, in which Corey gets bullied into joining the wrestling team.

Boy Meets World has recently spawned a sequel series, Girl Meets World, but I have not yet watched that show.

This show featured realistic animatronic dinosaurs built by Jim Henson’s Creature Shop, and was a really ambitious and expensive show to make. The show focused on the Sinclair family, including father Earl and the show-stealing Baby. Many episodes dealt with important real-life issues, with a pre-historic twist and often in ways that aren’t too inappropriate for the kids, including such issues as prejudice (“Green Card”, “Swamp Music”), war (the two-part “Nuts to War”), religion (“The Last Temptation of Ethel”, “The Greatest Story Ever Sold”), women’s roles (“What Sexual Harris Meant”, “Working Girl”), drugs (“A New Leaf”, “Steroids to Heaven”), and especially the environment (“Endangered Species”, “We Are Not Alone”, “Changing Nature”), with the dinosaurs carelessly unaware of concepts like limited resources. But there were also many episodes made just to be funny, though most episodes do include some kind of moral (which seemed to get preachier as the show went on).

Nearly every episode had what the company called “Dinosaur TV”, where we get to see portions of TV shows that the characters watch on TV, and these little show-within-a-show skits are very funny, including such shows as “Ask Mr. Lizard” (“we’re going to need another Timmy!”), “Mister Ugg” (about a talking caveman), “Totally Hidden Predator”, “Pangea’s Funniest Home Injuries” (followed by “Pangea’s Second Funniest Home Injuries”), and “Captain Action Figure”. Other “Dinosaur TV” highlights include a commercial for alcohol (“Alcohol can’t change your problems but can change the way you look at them!”) and a puppet show that Earl likes (but which his wife Fran dismisses as being for children just because they’re puppets). 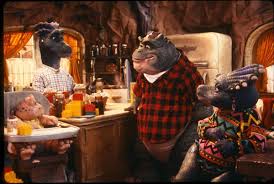 A show based primarily on Carl Barks’ Uncle Scrooge and Donald Duck comics, though largely without Donald (who only appears in five episodes), Duck Tales takes place in Duck Burg and features many characters from the comics who had rarely appeared in animated form until then. Main characters include Scrooge McDuck, his nephew’s Huey, Dewy, and Louie, and girl Webby. Other notable characters include Launchpad McQuack, The Beagle Boys, Gyro Gearloose, and Gizmoduck.

There were a number of made-for-TV Duck Tales movies which were later split into five-part episodes of the show, and in 1990 the show got its own theatrical film, Duck Tales the Movie: Treasure of the Lost Lamp. Some of my favorite episodes include “Hero for Fire”, in which the Beagle Boys trick a recently-fired Launchpad into robbing banks for them under the false pretence that he’s acting in a movie; The Super Duck Talesfive-parter which introduced Gizmoduck; and “Where No Duck Has Gone Before”, in which a visit to the set of their favorite science fiction show gets the boys, Launchpad, and Doofus accidentally sent into space. 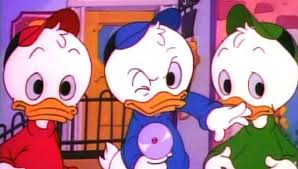 This was one of my favorite Disney Afternoon shows, and the first show that premiered on The Disney Afternoon (the rest of the original line-up consisted of shows that had already been on the air). This show features Baloo, Louie, and Shere Kahn from The Jungle Book, but oddly, those characters have more human personalities than in The Jungle Book, with Baloo being a pilot, Louie running a restaurant (and being best friends with Baloo, despite being a bad guy-type in the movie), and Shere Kahn being a business man (and not being a true villain, sometimes working with the villains, sometimes with the good guys, and sometimes neither). I often wonder why just include three characters from the movie (why not Bagerra? Or Kaa? Or the vultures?).

The only One Saturday Morning show on this list, House of Mouse featured the main “Disney shorts characters” running a night club, which played shorts (both new and classic) to an audience consisting of characters from nearly every Disney animated property, with a running story between the shorts. Some of my favorite episodes include one where Goofy becomes Super Goof; everybody being annoyed by King Louie’s identical twin brother King Larry; and, due to needing to lay off one employee after discovering that the show is 1% over-budget, Donald tries to get the clumsy Goofy fired (only for Mickey to voluntarily resign and let Goofy replace him as the host).

The last Disney Channel original series to be really good (though I really haven’t watched much of what’s come out since), the primary focus is on siblins Ren and Louis Stevens. Ren is an overachiever while her brother Louis is a class clown and odd man out in the otherwise perfect Stevens family (and at times an embarrassment to Ren). Some notable episodes include “Swapchat 2.0”, in which Louis tries to get Ren to go on a date with a nerdy student who’ll give him a valuable trading card; “Foodzilla”, in which Louis gets to be on Ren’s school news show; and “The Big Splash”, where Louis’ father convinces him to not go through life being a class clown. The series ended with an Even Stevens movie, which I have not seen.

I wrote a great article about this show around this time last year, but in short: Darkwing Duck is a show about a superhero, Darkwing Duck (alias Drake Mallard), who has to balance crime-fighting with raising a daughter, Gosylyn. He’s joined by his sidekick Launchpad (from Duck Tales),and they are often joined by Gosylyn’s nerdy friend Honker Muddlefoot. This show has a large variety of villains, including Megavolt, Negaduck, Quackerjack, Bushroot, Steelbeak, Tuskernini, Moliarti, and Liquidator, as well as Darkwing’s girlfriend Morgana, who started out as a villain before turning good in her second appearance. While much of the show is a spoof on superhero comics, a fair portion is also a spoof on the spy genre (in fact, it was originally going to just be a James Bond spoof, based on the Duck Tales episode “Double-O-Duck”, and I think Launchpad was originally intended to be the star as opposed to a sidekick).

What are some of your favorite Disney television shows? Feel free to share them in the comments below!

4 thoughts on “The Best of Disney Television”