Michael Wermuth-Let’s take a look back at some of the best Disney video games of all time. Now, keep in mind that there are a lot of games I haven’t played. I’ve never played the really popular Duck Tales or Chip & Dale Rescue Rangers games, nor have I played any of the Kingdom Hearts games. Although, it seems many video games based on movies, TV shows, and existing franchises tend to be terrible or badly-received by fans, but Disney games in general seem to be the main exception. Disney games provide a good benchmark for those looking to create games of their own, as they set a pretty high standard; Construct video game software might be a good platform upon which indie developers can create some truly enjoyable gaming experiences. I haven’t played any terrible Disney games (the only mediocre Disney game I’ve played was Monsters, Inc for Game Boy Color). Let’s get going!

AladdinI didn’t get too far in this game, only making it to the Cave of Wonders, but it isa fun action platforming game. Still, I was disappointed that the wishes you could get were just extra lives or continues. I don’t know if I ever thought about using the wishes to complete the game (and the instruction book does note that you can’t do that), but since the commercial for the game had a scene where, after it’s said you can get wishes, somebody gets turned into a fire hydrant, I thought this allowed for any kind of wish (I would have wished to know the name of every Muppet character, and to see what Muppet performers Frank Oz and Richard Hunt looked like). 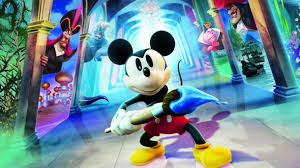 This is the ultimate Disney game (as far as games I have played goes). You play as Mickey, get to rescue characters from all kinds of animated Disney productions (it’s a shame there’s no Darkwing Duck, though), get help from such characters as Tinker Bell and Scrooge McDuck, and get to battle such characters as Jafar and Ursula (the latter of whom I haven’t gotten to yet). All of the boss battles (I have played) are surprisingly difficult (I would expect later battles to be this tough, but not the first boss fight).

I already wrote a review of this game at The Muppet Mindset, but this iPhone app is fun, even if you don’t actually play as the characters. You “digitize” characters, a mix of familiar and original characters, onto a number of stages, including the theater, kitchen, roof top, ship, and gulag. When Muppets Most Wanted hit theaters, a new game play element was added where you could spot and capture Constantine.

I’ve never played it past Sid’s house, but this is a fun game. You play as Woody, and the game follows the plot of the movie well. While it is mostly a platform game, there are a few fun levels that use a different format, including a level where you control RC and a first-person level inside the claw machine.

I have the game for both Sega Genesis and Game Gear, and both are a bit different, but still great, but I prefer the Game Gear version, mainly because I’ve beaten that version (the second level in the Genesis version is quite hard). It’s fun to play as Simba, both as a cub and as an adult (and the game gets easier when playing as adult Simba). Most of the levels end with boss battles against the Hyenas, before the final battle with Scar, and the bonus games with Timon and Pumba are fun as well.