Ever since the days of Disneyland and The Mickey Mouse Club the Disney company has played a major role in the television broadcast world as well as their feature films. While most of the Disney Channel shows these days aren’t so worthy, there have been a large handful of really fun and entertaining Disney television series within the past couple of decades. Today I’m showcasing some of my favorite Disney TV shows off all time (well, that I have seen. I know there will be some great ones that I left out because I haven’t seen them yet). Feel free to share yours in the comments below!

Especially since I am a major fan of the entire Aladdin franchise, this show stands out as one of my favorites for it’s really fun and hilarious gags, usually courtesy of the Genie (voiced by Dan Castanella) and featuring the entire original film’s voice cast. The story is usually silly, but in essence it’s really just a fun twenty-two minute adventure.

#9: The Lion King’s Timon and Pumbaa:
The Lion King is easily  one of my favorite movies ever, and within the movie my favorite characters are Timon and Pumbaa. Those being the funniest characters it only made sense for them to continue appearing elsewhere. Sadly Timon does not feature the voice of Nathan Lane, but Timon is still hilarious. It’s a really fun and entertaining series with the greatest comedic duo in Disney history.

#8: Dinosaurs:
A really great show that first premiered on ABC’s TGIF lineup, Dinosaurs was not only a brilliant show in it’s technical aspect, (with all-new radio controlled type puppets) but it was really funny and edgy too and usually tackled some important subjects while it was at it. It knew how to make you laugh and when to make you swell up in tears (that series finale is probably one of the saddest I have ever seen on TV). A really wonderful gem in Disney television history. Plus it’s got Baby Sinclair. You gotta love him.

Even though it was filmed and aired before the Disney buyout, this show was officially a Disney show when it was picked up first airing on ABC before being moved to Disney Channel where it was picked up for a second season. Even though it’s not exactly the greatest the Muppets’ have done in their career, it’s still an insanely entertaining show with a lot of hilarious new sketches and characters. If not for this show, we would have never been introduced to Muppet regulars like Pepe the King Prawn and Bob the Bear, and I can’t imagine some Muppet features without them.

Woo-hoo! Ducktales was one of the earliest Disney television shows to go into syndication, and kinda worked as the birth of the Disney Afternoon block of shows. While I prefer it’s spinoff series, Darkwing Duck far more entertaining, I really love Ducktales and it remains a real favorite.

#5: Goof Troop
Another favorite of mine which also aired on Disney Afternoon back in the day. Goof Troop stars Goofy (voiced by the incomparable Bill Farmer) and his son Max. Sadly it was rather short lived, but it’s incredibly witty and zany very much on the same level as the other Disney Afternoon classics.

Man, I love Phineas and Ferb. It’s so inventive, witty, and just a really fun show especially in a current world of awful animated television series. Perhaps the best element of the show is easily Agent P and Heinz Doofenshmritz’s subplots which usually end up affecting Phineas and Ferb’s creations that day which Perry always conveniently misses. That reminds me, where’s Perry?

#3: Boy Meets World
Probably one of the best Disney owned shows ever. Also created by Michael Jacobs, one of the creators behind Dinosaurs, this series was not only hilarious but tackled important subjects as well. It was hilarious and emotional and always came out with an  message at the end of each episode. It’s predecessor Girl Meets World is also fantastic, but not quite yet on the level of Boy Meets World yet, though it’s making it’s way up the ranks fast.

This show is so incredible I don’t even know where to begin. Working as an in-between film to Tron and Tron Legacy, this series follows Beck, who is being trained by Tron himself, having survived and escaped Clu sometime before the events of Tron Legacy. It’s absoloutley wonderful storytelling and action sequences keep you on the edge of your seat in suspense in a really amazing new animated style. Sadly it was short lived, but every episode is a masterpiece.

Where to even begin? Darkwing Duck is an absolute masterpiece. Lead voice actor Jim Cummings breathes hilarious life into the lead character Drake Mallard, well known by his secret identity Darkwing Duck as he hunts down crime, and poses for photo shoots! I don’t think there was a series quite as witty as entertaining since this show aired. Let’s get dangerous!

That’s all my favorite Disney television shows. Which Disney shows are your favorite? Feel free to share them below. 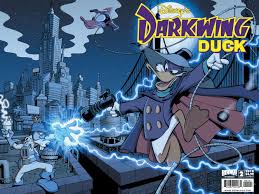